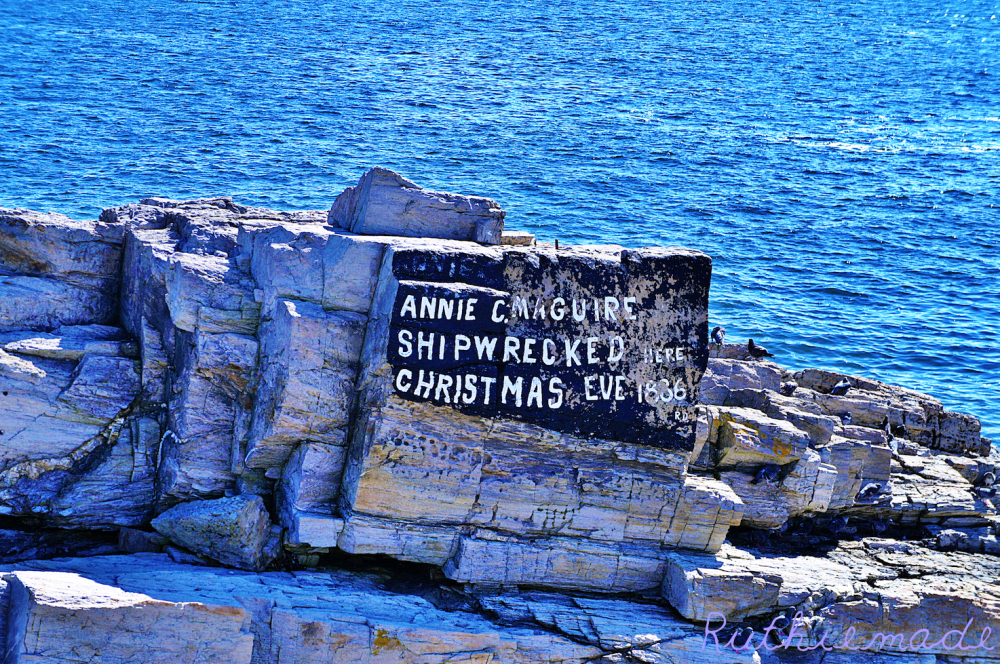 Previous Next
← previous day next day →

Annie C. Maguire was a British three-masted bark, sailing from Buenos Aires, on December 24, 1886, when she struck the ledge at Portland Head Light, Cape Elizabeth, Maine. Lighthouse Keeper Joshua Strout, his son, wife, and volunteers rigged an ordinary ladder as a gangplank between the shore and the ledge the ship was heeled against. Captain O'Neil, the ship's master, his wife, two mates and the nine-man crew clambered onto the ledge and then, one by one, crossed the ladder to safety.

The cause of the wreck is puzzling since visibility was not a problem. Members of the crew reported they "plainly saw Portland Light before the disaster and are unable to account for same."

Today, letters painted on the rocks below the lighthouse commemorate the wreck and the Christmas Eve rescue.
I value your comments

Photography is my hobby and I enjoy viewing your comments and images , because they help me become better. I look through my lens and see art, beauty, color, texture and detail. I hope you enjoy seeing my journey from my point of view. Thanks for stopping by.
You can find me on Facebook
Twitter
Instagram
Flickr
See my Color Spotlight images
About.me

Interesting story. Great was that they were saved

Excellent !
Plus the report and memory of the sad story...

Excellent shot.. a place with history.

Awesome colours and touching text in the rock.

A lot of cold very saturated blues in this shot Ruth.

Interesting intro and a nice photo.

Love these blue tones - and an intriguing piece of history!

A great story of the wonderful rescue at this spot. Strange situation though, since they had clearly seen the light.

Wonderful place with lot of history behind it! Nicely presented with good narration!

Thanks for this story that relates to Argentine ship that capsized in 1886 and which retain the memory written on the stones. Great capture at sea rock with magical colors and light. A hug.

Fascinating history you give us with this superb image Ruthie

Thank you for the very informative background on this composition! I only wonder why Annie and her crew were out on their boat and not at home with family celebrating the holiday. Beautiful colors and great textures captured here!!

A fascinating story, hope they were successfully rescued to get some Christmas Turkey the following day.

Great shot and interesting history !!! The saturated colors and light are fabulous ...

A beautiful shot of this interesting historical tidbit.

Beautiful image. I like all blue tones. What an amazing story!

A very interesting place, wonderfully colorful in your photo.

Lots of texture here-in the water and the rocks.

That is a very interesting back story to this shot. Very nice.

That is very cool.

A great story, I like all the history of telling stories!:-)9Haleja.

Have a good weekend my friend!

interesting info ... somehow escaped me when i was there !!!